WE HAVE ARRIVED AT THE CONVENTION IN DENVER - AND IT'S GREAT 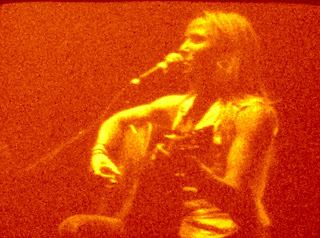 Virginia Governor Tim Kaine hosted the opening night celebration at Red Rocks with a barbecue and concert that had the politicos, delegates, families and friends dancing in the aisles, in this natural arena carved out of massive red rocks, overlooking the mile-high city in the midst of a far off and brilliant lightning storm.
Mame Reilly outdid her past accomplishments to choose this extraordinary venue and entertainment Sunday night to kick off the convention.
We had an open bar with Colorado margaritas and tables spread with garlic potato salad, various meats, cole slaw, fresh buns, salad, fruit and spores for the child in you.
The views were spectacular and Cheryl Crow crooned how, "Change will do us good."
We had set out for Denver in the Virginia dark early on Sunday with former Secretary of State Madeline Albright, delegates from across Virginia and DC, journalists from Readers Digest and the Wall Street Journal, and we did this early Sunday AM on United 301, the official airline of the Democratic Convention.
When we arrived, Denver Mayor Hickenlooper had greeters in cowboy hats to answer any question and we were whisked (well almost) out of the airport on vans to the Virginia Delegation Hotel , the Crowne Plaza, hosting, VA, DC and West (by God) Virginia.
En route, we saw police in riot gear and on horse back, how can they move in those black batman like outfits, overly concerned (in this observer's view) about some pretty tame demonstrations against the Iraq War - no argument there.
I did wonder why the polizei weren't instead dealing with some pretty lame Republican objectors who were road-side with hand-painted signs, that lacked a certain civility; perhaps they didn't get the memo that their convention was not in Denver this year; if so, no wonder they were upset.
True to our democratic support of mass transportation, and our strong belief in long queues, and you know why, so that we can get to know each other better, and just "catch up", we're getting around the town in bus when we are not on foot.
It was a long and happy and hopeful day when we pulled up at the Crowne Plaza after our Red Rocks opener.
J. Flannery

Hillary was a gracious and fabulous speaker, as usual, with her special wit and sharp insights.

This show of unity (and I hope it is more than a show" Only emphasizes how lame the Republicans look. Of course, the "swift bloaters'" blogs are up; small-minded groups with big, ugly mouths and nothing to say...this time, Dems need to make sure that the only place they plant their feet is firmly into thei own mouths.

I think McCain should pick LIeberman. Wouldn't Capitol Steps have a blast with that? The Liberal-conservative fantasy played out in Iraq...indefinitely. Or Romney. Think of how many family bathrooms they could share. 24? 36? Number unknown.