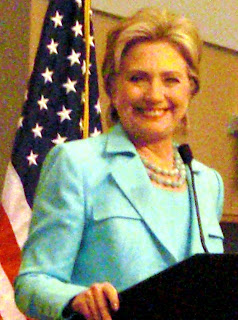 At 1:45 pm this afternoon in Denver, before an assembly of her elected delegates, alternates, friends and staff, Senator Hillary Clinton announced "I'm now releasing you delegates."

The hundreds present shouted, "No."

Hillary explained that she was releasing her delegates and left to each delegate to vote his or her conscience, and to allow for anyone who was bound by those back home to vote for her if that's what they had to do.

Hillary made it clear, however, after the vote, that she expected everyone to support vigorously the nominee, Senator Barack Obama, as that's what she had already done, and planned to do.

There were various reactions but, in the category of moving on, one delegate summed up what a lot of others had to say, "All I want from Obama Thursday night is what he really stands for, and 'hope' and 'change' is not enough. I can't buy a pig in a poke. I want him to give a speech like Hillary did and tell us what he stands for and I want to know the specifics. So that's why I'm looking forward to Thursday's speech. I'm pulling for him to deliver. But he's got to deliver."