A Ballot with your Bagel - Early Happy Returns 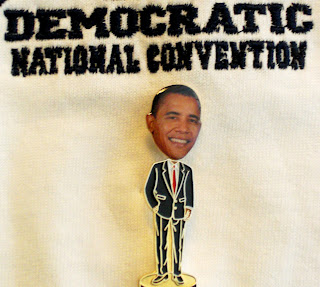 Clinton supporters this morning had a ballot with their bagel.

Obama and Clinton conferees arranged for every delegate to get to vote in writing for the presidential nominee they prefer.

In the Virginia delegation, as elsewhere, you got to sign your name in support of your candidate as you picked up your credentials for tonight's session of the convention.

As indicated in an earlier posting, there were competing accounts of how the balloting would proceed.

Some who got wind of this process yesterday objected that this was a dilution somehow of the right to vote for Hillary.

While the approach may be unprecedented, that doesn't compromise the essential element of the franchise, to get to vote for the nominee you prefer and the one your friends and neighbors back home elected you to support.

If in truth and fact, this was a contested race, and not a foregone conclusion, then perhaps this process would be faux and not fair.

But there could hardly be any justification for stringing out the process unnecessarily, except to obstruct the convention's business this evening.

Eula Tate and I were elected in the 10th Congressional District Convention in Northern Virginia.

The other night each of us signed a petition to advance the balloting process, to put Hillary's name in nomination for president of the United States.

This morning when I signed in, I took my favorite pen and marked an "x" in the column next to Hillary's name, as others in our delegation did in support of Barack Obama.

Then I signed my name. I had voted for Hillary Clinton to become our nominee.

When I joined the breakfast in progress in the adjoining ball room, I found Eula and asked her if she had voted.

She said she thought that we were not to vote. I said she didn't have to vote but this was her opportunity. I confirmed I was sure it was all right.

As Eula and I had been elected together for this purpose, we walked out together to the table where the ballot was available to record Eula's vote.

She picked up the pen and registered her vote for Hillary Clinton.

She gave me that look out of her big eyes like, "So how about you."

In this delegate's opinion, and I'm sure this is shared by many Clinton supporters, we have crossed another obstacle and bound the convention tighter and closer thereby.

We have advanced again in the process of reconciliation toward genuine unity.