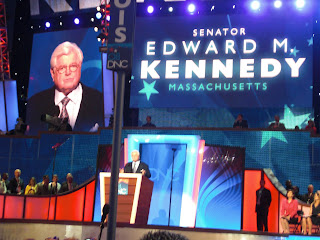 We are at the Democratic Convention in Denver, Colorado at the Pepsi Center and the opening gavel has sounded on the 45th gathering of 20,000 of the party faithful.

Virginia is seated in the first wave of folding chairs, located far forward of the other states on the floor of the convention only 50 feet from the podium with only one state more prominent, Illinois - Senator Barack Obama's home state.

Virginia is prominent because it is "in play" this November with 40 Obama campaign offices throughout the state, fighting to turn the Commonwealth blue, to garner 13 electoral votes, and to do so for the first time since 1964 when President Lyndon Johnson carried the Old Dominion over Senator Barry Goldwater.

The front wall of this expansive arena, the backdrop for the presenters, is a composite array of brilliant lights and projection elements, in the shape of an uplifting wave, seemingly crashing and splashing upward to spend its watery force in the hall's topmost rafters.

This grand hall is awash in delegates, going and coming, up and down the aisles, on stairs, between chairs, out by the concessions, and the principal objective of the delegates is to meet and talk with other delegates about this collective obsession they share for all matters political.

Of course, we delegates also want to talk to anyone with a camera, pad or microphone to explain and preserve the fine points of this historic undertaking.

"I can't believe I'm here," said one newly minted Virginia delegate, "not with these people around me that I've only seen on tv."

Stage and screen actor, Tony Goldwyn (who played the bad guy who schemed to betray and kill Patrick Swayze's character in "Ghost"), stood less menacingly in the aisle by the Virginia delegation and his picture was taken with an enthusiastic fan, Northern Virginia delegate, Charisse Espy Glassman. Charisse simply walked up to Tony, and said, "I heard you were a killer;" he answered, "I am" and then posed with a smile.

Senator George McGovern squeezed past but then paused to say hello and pose. CBS's Katy Couric was only feet away, prepping for the evening broadcast.

When singer John Legend stood astride that wave-like stage, he struck a convention theme when he sang: "We're the generation that can't afford to wait ..."

Singer Legend threaded the crowd's spirit, with his lively brassy beat, so irresistible, that the throng came to its feet for an extended foot-tapping, flag-waving, hip-swinging dance, and there was no division in the house when he finished singing.

I attended my first democratic convention at the Madison Square Garden in New York in 1980 when Senator Ted Kennedy gave a speech that concluded with a Tennyson passage that defined his life's view, that he was "a part of all that [he] ha[d] met, [and] though much is taken, much abides." He proposed this standard for us all.

Given the Senator's recent illness, Tennyson's tenet makes a nation anxious for what this illness may take and how it may compromise his abiding worth.

Tennyson spoke of "one equal temper of heroic hearts" that are "strong in will to strive, to seek, to find, and not to yield."

The convention scheduled a film tribute to Senator Kenedy, prepared by Ken Burns, that was to be introduced by his niece, Caroline Kennedy, to celebrate his "heroic heart".

We presumed the Senator would be absent - because his doctors told him to stay home. But the rumors began to spread that he was coming anyhow.

No one thought he would speak if he came, even when he walked to the rostrum, imagining he would do no more than acknowledge, perhaps with a nod, the convention's kind gesture.

He said, "thank you" twice, and still no one expected more.

The Senator then took the rostrum in hand like he was grabbing an old friend by the shoulders, planted himself firmly, facing straight forward, his large white-maned head looking out at us all, and he spoke, in that deep bass, to an audience choked with emotion, that: "Nothing could keep me away." Wild cheers and waved signs greeted his double meaning.

He was still only warming up. With celtic thunder, he promised the next Administration will "break the old gridlock" that denied health care to many Americans, and make it "a fundamental right, not an expensive privilege."

Senator Kennedy promised that, in the new Administration, our "men and women in uniform shall never again be committed to a mistake."

Senator Kennedy challenged us to ground our government, in peace and war, on the "high principle and bold endeavor" that defined the american character. What would have happened, he asked, with a laugh, if his older brother, President Kennedy had not said, "we're going to the moon", but said instead, "it's too far to get there." President Kennedy's decision was the only right decision. "It's what we Americans do," he said, "We reach the moon."

Twenty eight years earlier I waved a blue-backed sign with the white lettered word "Kennedy" in Madison Square Garden with thousands of others who witnessed his earlier convention speech. Now here we were doing it again.

Years earlier, Senator Kennedy ended his remarks, saying: "For all those whose cares have been our concern, the work goes on, the cause endures, the hope still lives, and the dream shall never die."

This evening, he amended his coda, casting it for another generation, for another democratic candidate, to carry the torch he bore for so many years, saying, "the hope shall rise again, and the dream lives on."

It was a night for America to remember and to celebrate.