HILL HEALS - OR HAS SHE? 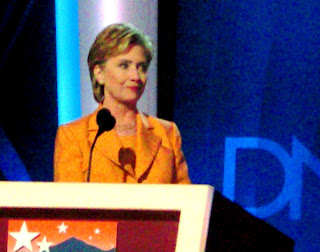 On the second night of the convention, Hillary Clinton brought down the house when she endorsed Barack Obama as the democratic party's nominee. You can read what she said if you didn't see and hear it on any one of the media outlets. It was a great speech and it said everything that needed to be said. The question is what effect will it have going forward?
Most significantly, the question remains, if Hillary's delegates feel as she does, will they act as she suggested she should? In other words, are her supporters ready to go to work for Obama, and then cast their ballot for him in November? No question the trend is in that direction but there's still work to be done.
To all appearances, the reconciliation looked a done deal in the convention hall. The signs with Hillary's handwritten name waved above the heads of the delegates, and supporters of Obama and Clinton appeared as one in the celebration. The word "unity" filled the hall. It was emblazoned on long standing blue signs on cardboard poles that allowed you to thrust them into the air. There were cheers and laughing. But was this all authentic? Did the show conform to the reality? What's in the hearts of the delegates?
The conversations afterwards among the Clinton delegates, as they walked from the Hall, and made their way to the parking lot, to wait for busses to take them to celebrations afterwards or their hotel rooms, revealed there's still work to be done. We are at a tipping point and forecasts are favorable. We are inching toward unity and it's possible but we're not there yet. And this is not about sour grapes.
Obama supporters don't understand how that could be. Don't get me wrong. They are not uncivil. They don't say - get over it - even if they are thinking it. It's because they haven't stood in the shoes of the Hillary supporters.
As best I can understand the reservation, it is not so much about losing to anyone - even if it was at first. It is about whether Obama will truly embrace and advocate what Hillary fought to implement as her program of political action.
These activists were drawn to Hillary because of issues she espoused. She said it herself. This is not about her. It is about health care and women's rights and more. The devil is in the details and that's what's holding back the enthusiasm of some.
Obama served himself well when he spoke on the CBN that he would choose Supreme Court justices who would recognize a woman's right of privacy, and McCain disagreed. It helps when this Supreme Court has made many decisions that disfavor what we believe are our rights as individuals to be "let alone" and that McCain would make a bad situation worse for years to come.
The Clinton delegates are meeting today at 1:15 pm at the Convention Center with Hillary Clinton to confer about putting her name in nomination. That's the next important point of progression toward real unity.
There is talk that the nomination process will be more faux than fair.
Delegates believe that Hillary's name will be put in nomination and there will be a roll call that causes votes of delegations to be registered reflecting the support of voters for her nomination as our presidential nominee.
They believe that because that's what they were told - or at least were led to believe that's what's going to happen.
News reports and behind the scenes chatter suggests that will not happen.
It would be a big political mistake to have announced one thing and to do another, to have a bait and switch.
It's because the partisans are being knit together, moving toward unity, and it's a delicate process and it will work if it's done right.
This is no time for one side or the other to suffer buyer's remorse about this agreement - as it was announced and as it was understood.
Last nights floor demonstration may lead some to think they can dispense with the roll call vote, make it pro forma, less significant than it was originally understood.
I think that would be a mistake.
What is the downside risk of a less substantive show of putting Hillary's name in nomination? Will the failure to have a roll call cause a protest on the convention floor? I can't say. But it will stick in craw of those who thought that was going to occur and will affect the enthusiasm necessary to accomplish what we say we want - to elect Obama in November with the work of these partisans who know to lead others in their home communities.
In sports and life generally, we play many "games" where winner takes all. In the general election, that's an easier undertaking. You don't have to lose and then work together to fight a common opponent.
When you have a "family squabble," as we have here among the democratic activists, if you win, the question is how do you reconcile afterwards and move on, and work together.
It is hard to say what one thing will determine whether this convention process wins the hearts and minds of Hillary's supporters.
The failure to thread this needle today on the nomination process means the can gets kicked down the road to see if Obama himself has to close the deal on Thursday night when he gives his speech at the Invesco Center.
J. Flannery
Posted by John P. Flannery at 12:30 AM