TENNESSEE WALKERS - NO HORSING AROUND 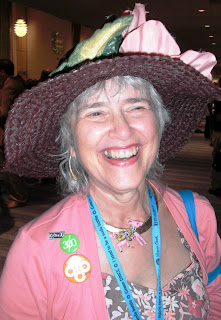 When standing in line for Hillary Clinton's confab for all her delegates at about 1:30 pm this afternoon, we got to spend some time with Clinton delegates from Tennessee and to ask them if "all was well" in their neck of the woods, in rural Tennessee.

Barbara Brown, above, is from Clarksville, TN, and she had spent seven years in Blacksburg, VA.

Her breakfast cereal was ruined somewhat this morning when the Clinton caucus for her delegation met.

They were discussing voting for Hillary and one of the Clinton whips announced "after much soul-searching," that she was voting for Obama.

The Whip had been in Clinton meetings to discuss the roll call vote and the Whip decided it was "the right thing to do."

So I asked, "and how tempered was the delegation's response?"

"It was more like a firing squad," Barbara said. The whip was ousted in a parliamentary gallop.

Apparently, when the next whip climbed into the saddle, a male whip, he committed a gaffe as well. "He" overlooked and failed to recognize a female delegate who had her hand raised, " Barbara said. It was obvious to everyone. "The oversight was compounded by the fact," Barbara said, "that he recognized a male delegate to speak instead."

David Harper who was right there listening to Barbara and said, "That's why we were for Hillary, to stop that kind of bias against women."

David is from Lafayette (and don't say it like that famous frenchman's name, you know the one who has a square out in front of the White House, if you don't want to get slapped up side the head).

"We're going to have to try much harder," David said, "to carry down-ticket candidates this Fall." He said this was critical in his state's rural areas. "We have a strategy for that," David said, "and we're hopeful we'll be able to pull that off, but it's not going to be easy."

Barbara complained that Obama is "out of touch" and out of sight - as he hasn't been back to Tennessee. By comparison, Barbara said, former Rep. Harold Ford, takes on every redneck coffee shop; by the time Harold leaves, they want to support him and give him money. He can talk to the people. Obama has written off Tennessee. He has to do the same thing."

"Hillary had a lot of support," Barbara said, " and "it would have been different if Hillary had been the nominee or the VP."