BILL CLOSES THE DEAL FOR OBAMA 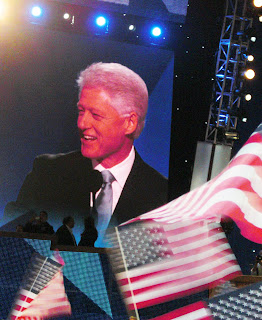 Former President Bill Clinton reminded us tonight how he became President, and how he got re-elected, when he made the case for nominating Senator Barack Obama to become President of the United States.
When he came on stage the crowd rose to its feet, shouted Bill's name, and generally reacted without any concern except to welcome an old friend.
And that was despite the recent primary that had divided the party between Senator Hillary Clinton's supporters and Barack Obama's supporters.
We all clapped and rocked and, in some moments, Clinton appeared quite moved at the enthusiastic outpouring.
When he could finally stop us all cheering and demonstrating, and be heard above the crowd, as his time to speak ran by, President Clinton couldn't say enough good about Obama, including even what he said about the hotly contested primary with Hillary, namely, that "[t]he long, hard primary tested and strengthened" Obama.
Contrasting himself with Obama, he told the convention how "we prevailed in a [presidential] campaign in which the Republicans said I was too young and too inexperienced to be Commander-in-Chief."
Referring favorably to Obama, he asked the convention if it: "Sound[ed] familiar?" In other words, isn't that what Senator McCain is doing now to Obama?
Bill was instructing not just the general public but the delegates as well about his rationale for supporting Obama and attacking McCain.
Bill told the convention that "[i]t didn’t work in 1992 [for Republicans to attack his inexperience] because we were on the right side of history."
He said similarly "it won’t work in 2008, because Barack Obama is on the right side of history."
"Barack Obama will lead us," he said, "away from [the] division and fear of the last eight years back to unity and hope."As he said so, Bill Clinton was leading the party away from division and perhaps fear as well - by persuading the delegates to do more than just vote for Obama on election day.
Bill knows what it takes to win a tough election, and he wanted a committment that all delegates would work together before election day, no matter who they had preferred in the primary, and lead their friends and neighbors to vote for Obama, and for Biden.
Clinton's intellectual heft, his facility to get things done, and his transparent passion for the business of government are why we listen to him.
Clinton did more than speak this evening.
He brought the party together.
The tipping point was manifest afterwards, as many delegates considered how to elect Obama, and that included Hillary supporters.
J. Flannery