CAN YOU BE FREE IF YOU'RE IN A CAGE? 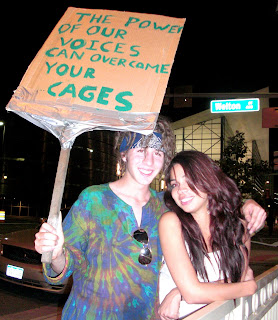 Jacob Paul & Macella Monney
Some of our citizens, young and old, had their protests muffled and contained, and I thought that was wrong.

Outside the covention center, there were "cages" designated for "protesting."

The name alone should give anyone pause.

What do you say to someone who wants to "protest"?

Would you please enter the "cage," sir, or madam, if you want to "protest"?

That plainly diminishes any one's dignity and coerces and chills what may be said.

A "cage" denotes and connotes restraint, captivity, control and containment and usually of an animal that we think is "dangerous" and/or "undeserving" of too much freedom.

It seems somewhat ironic to "contain" or "compromise a protest against the Iraq war outside the Pepsi Center when we were objecting to that same war inside the convention.

But the point is not whether the various 1st amendment exertions of speech in these parallel venues are congruent or not, whether they be comments on the war, or fluoridation, or the home heating plan of Senator McCain.

What's most important is that we allow our citizens to speak their mind and speech in the most robust manner for bromides may not be offensive at all.

I am encouraged, however, that the young instinctively know that this is wrong.

Students Jacob Paul and Macella Monney had a hand-written sign they carried down the Denver street after tonight's convention, the letters in Kelly green, stating, "The power of our voices may overcome your cages."

Jacob and Macella may not know the words in the relevant constitutional document, even though it is the First Amendment.

But they have demonstrated that instinctive objection to anyone curtailing their comments about anything.

And perhaps that's what we mean when we say "certain inalieanable rights."