WALK INTO THE NIGHT - FROM THE CONVENTION 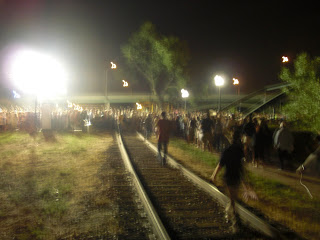 When we left the convention hall last thursday night, with almost 80,000 of our closest friends, we decided it was a better idea to walk from the convention hall downtown, rather than take the bus; the night before it had taken an hour and a half from the Pepsi Center to travel by bus to the hotel. Invesco was bigger and further away.
It may not have been any faster to walk -- but it sure was a lot more adventurous.
Jim Turpin, the State Dem Vice Chair for Finance, was my seat mate at the convention.
Our wives, Holly Flannery and Susan Prokop, were seated together in the nose bleed seats watching the grand festivities with tickets promised and delivered for our "guests".
When the fireworks stopped and Jim and I had said our last goodbyes to other delegates, and gave what comments any journalist wanted, our next logistical challenge was where to meet our brides.
What did anyone do before cell phones?
The security forces were directing Holly and Susan to parts unknown. But we made our rendezvous despite their helpful interference, and set out in high spirits with Rachel Rifkind, from Fairfax, VA, who was wary about the walk, and made up the fifth member of the "Walking Virginians Team."
Don't get me wrong about the busses. The busses had been ok, the drivers polite and helpful, you met and had fascinating conversations on whatever bus you snared, and you'd talk with governors and senators and elected reps and party activists from across the country, telling you what it was like where they were, but, after sitting on the floor of the convention a fair amount, sitting on the bus was getting old by Thursday night, and we thought a perambulatory dialogue was much to be preferred.
The best laid plans of tired delegates will often go astray.
We wandered in the dark circling the arena to find the underground path from the arena downtown by which to walk. A good friend from Denver, Steve Holtze, told us where the path downtown was.
Here's the rub, and wouldn't you guess it, there were concrete road dividers topped by fences in almost every direction except where the busses ran and where we could not go.
On our final arc to the south east of Invesco, the crowd massed, pushing slowly toward an opening in the fence, seemingly torn open above the 3-foot high concrete road dividers.
When I say mass, I mean mass of people. No one was shoving or impatient, but we were a crowd in small passageways, patiently waiting for our collective opportunity to make any advance at all.
At this opening in the fence, this is where we felt like Alice dropping down a rabbit hole.
We hopped the concrete divider, although not all "hopped" as well, and that accounted for the crowd delay as the mass pushed up against even the more nimbler hoppers.
Once over, we climbed a slight hill, and found ourselves on eerily lit train tracks, lights pointing toward us, and we made our way up the tracks to a crowd pushing from our left toward a slim overhead bridge (see pix above) en route, we assumed, downtown.
We all found the circumstances engaging, and spirits remained high despite the slow going.
The euphoria of the convention and continuous company and remarks of those around us made what might have been annoying quite insignificant.
The night setting, tracks and walking bridges, surprise button vendors, railroad crossings and flag and sign-waving crowd, made it all fun somehow, even though there were no signs to tell anyone where to go to get downtown.
We were rewarded with our sense of direction, as lemmings sometimes are not, and arrived at a restaurant downtown not two blocks from our hotel, and where Congressman Jim Moran and his bro, Delegate Brian Moran, were settling in.
We enjoyed their warm welcome and then the brothers Moran sent over a small feast of dishes that we consumed in (almost) an instant.
We gave the Moran brothers a triple loud cheer for their good neighborly gesture, toasted and downed our nightcaps, and retired to catch early airport shuttles and planes, courtesy United, back to the Old Dominion.
J. Flannery
Posted by John P. Flannery at 1:56 PM

Great posts, John! Thanks! It was also that last night of the convention that I realized how much Obama has already changed Washington. Earlier in the week, I attended a poker tournament held by my organization, Paralyzed Veterans of America, where I met a staffer from Sen. Webb's office who had given large sums to PVA to take part in the event. Then, Cong. Moran - as you described -- buys me and my companions dinner! I am one of those nefarious registered lobbyists and I had Congressional staff giving money TO my organization and a member of Congress BUYING ME a meal! Now, that's Change I Can Believe In! Susan Prokop