OBAMA: AN AMERICAN DREAM AND A PROMISE FOR CHANGE 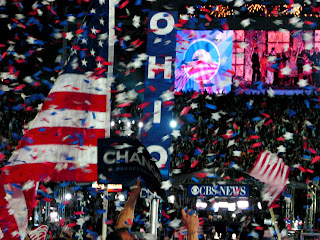 America began a forced march to restore its historic legacy in Denver last night when an army of 80,000 people, in a mile-high stadium, shouted as in one voice that we had had enough and made a promise to change all that this November.
We have set out to end the Joycean nightmare from which the nation has appeared unable to awake - to cure economic stagnation and end military adventurism - policies that have compromised this nation's vitality.
On the anniversary of a dream, "too noble to ever die," by the lights of one speaker, proclaimed long ago at the Lincoln memorial by Martin Luther King, by a man who gave his life for that dream, a dream only partly realized even today, we re-dedicated ourselves to the promise made in the pristine words of the american constitution, to fulfill that promise made to every American by our founders, that we all are truly equal before the law and before our government, and set ourselves a path to quench "the flames of withering injustice" that have made a lie of that historic promise.
The excited and hopeful crowd in the stadium joined with the millions watching and hearing this convocation from across the nation and bound their souls to ours to put an end to the shame and disgrace that this young democratic experiment has suffered for too long.
This stadium and this event became the focus of hope for the many who have realized how parched they've become, how thirsty they are for fairness and truth, after eight years of political drought.
There is hardly a person who has eyes to see and a mind that can think who would disagree that we are struggling to experience, in the words of King, "a joyous day break to end the long night."
We hope to end a national ethos that has made us captive to the fear and lies that perpetuate these greedy power seekers who have dominated our national debate and made us all less than we could be while all the time saying, lying through their teeth, that they had our best interests at heart.
We hope to find the common ground for common folk who do common things in a kind of quiet courage and dignity that reflects what's in our collective soul.
Senator Barack Obama has raised his voice to say aloud what we have all known and believed for so long but we were worn down by lies and the seeming futility of opposing the wrong-doers who have compromised our American dream.
Senator Obama was right last night when he said this was not about him although it might not have come to pass had he remained silent himself.
It is about us and what we want and we have to stand up and say so for we do not have the luxury of waiting any longer.
Virginia Governor Tim Kaine, a man of faith, whose public service is informed by his deeply held beliefs, spoke of the mustard seed, at Mark 4:31-32, how this most humble of seeds when sown in the earth grows to have such breadth and reach that it can shade the birds that fly above.
Governor Kaine likened our effort to this humble seed and from such humble beings we can become a force to move mountains - standing in the way of this nations dream and promise.
We left a stadium in Denver last night to do nothing less than realize the American Dream compromised so long by unworthy men and women who have made pretense at protecting and caring for us when all along they were only think of themselves.
We have now set our sights on November, our work is cut out for us, but if we do our best, we shall finish this fight with the election of Senator Barack Obama as our next President and Senator Joe Biden as our Vice President.
J. Flannery
Posted by John P. Flannery at 7:01 AM