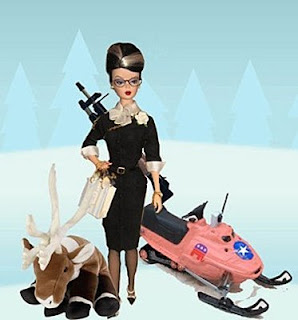 What the Republican smear machine does is line up smudged slandering images side by side, big lies, and causes the voters to hate and fear based on the false demeaning conclusions about the person at issue, making that person a pariah, an outcast, not one of us.

When the Republicans falsely state that Obama wanted to teach sex to tots, they go way past the candy from strangers stereotype that causes us all to recoil from such conduct.

A disciplined mind would see through this.

It might wonder if this was some misdirection to undercut sex education in every context - and wonder why anyone would want to do that.

The Times wrote a fair editorial saying we should ask her questions at a press conference (see below). It's a good point but a more rigid mind would say we already have enough information about how unsuited she is to ever be president and turn its attention to why McCain, at his age, would choose her if he was in his right mind - and truly cared about America (as he says he does).

In the example at hand, the Republicans seek to innoculate the public debate from teen pregnancies that might be avoided by sex education AND they get to punch Obama in the face at the same time - a twofer.

We all know they think this way. Bush has done this for years.

That is the political challenge of this campaign - how to speak truth to a lying unscrupulous opponent who trashes american values even while pretending to represent them.

Could the Rs running McCain really be so sinister?

Yes. Absolutely. We have too many data points to teach us that that's how they do their dirty business.

What must be our response?

More of what Obama did the other day about the faux outrage over lipstick on palin's collar.

What we can't do is presume that the media will "do it for us" - as I honestly believe was the wrong-headed short-term stratagem of the Obama campaign following Palin's announcement that has got us off balance and struggling to get ourselves back on course.

And I'm encouraged we're making our own arguments again.

As for the media's backbone, to return to a real problem in this nation, consider the proposition that the Obama campaign made that we can expect the media to get it right.

There was a time when this would have been sufficient. But the traditional media has been tamed. The vitality of serious criticism now lurks in the blogs and e-mails, the digital underground. It comes from the ground up, from the people, if they are alerted to what's at stake. The big mistake in most arguments is to assume the unstated proposition is embraced as obvious. You can't blame anyone for missing an argument that is never made. And we must make the argument loud and clear that the only way this McCain gang can win is the way Bush won and that is by lying.

If the "legitimate" media could be coerced, coddled and coopted into a role as quiescent observers of the lies that took us into the Iraq war, instead of irate critics or straight reporters of that lying policy, then why in the world would we expect them to find a transforming backbone in the remaining 50 days of this presidential campaign.

We have to think politically in terms of self-help, doing it ourselves, by talk, door-knocking, blogs, e-mail, snail mail, tv, radio, flyers, whatever it takes.

As one Dem told me, we dems are bringing a martini to a knife fight.

Every democrat should be required to watch Rocky, hear those bells and horns, think about fighting as a down and dirty slug fest, of right against wrong, because we have to, and then run out the door and grab the lapels of a friend or neighbor and tell them what these thugs are doing to this nation and our public discourse.

In other words, we need more bare-knuckled fighting and the process and the lies spewing from the McCain machine is as fair an issue as any in the "change" theme because, if we "change" how we talk about public policy for the better, we may actually restore a needed public dialogue that hasn't been free or truthful for years.

Process is out-come determinative and not to challenge the McCain's slash and burn process including its demeaning choice of a back bench governor, posing as ready to be our commander in chief, is to miss how we got into the Iraq war and how we trashed our economy and our individual rights and liberties.

This crowd has been lying and diverting our citizens for so long, they believe it's governing.

We promised America a grand debate and we have that opportunity.

McCain like Bush makes light of serious discussion and demeans the policy choices of our time with sloganeering.

We have got to roll up our sleeves and beat these bullies - and not just to elect Obama and Biden - but to restore the promise of America for this McCain ticket and its roving band of slandering sloganeers are prepared to do worse than they have already done to this country and we fail to stop them at our own nation's peril - at home and abroad.

Good comments John, only question I have is what message are we supposed to speak when we knock on these peoples doors? Can you end us some links where we can find the "real" truth.